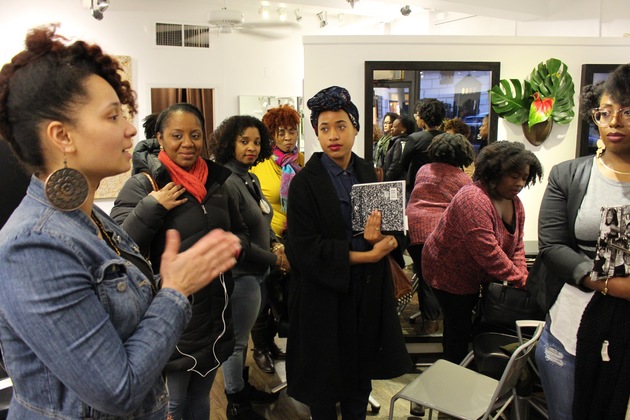 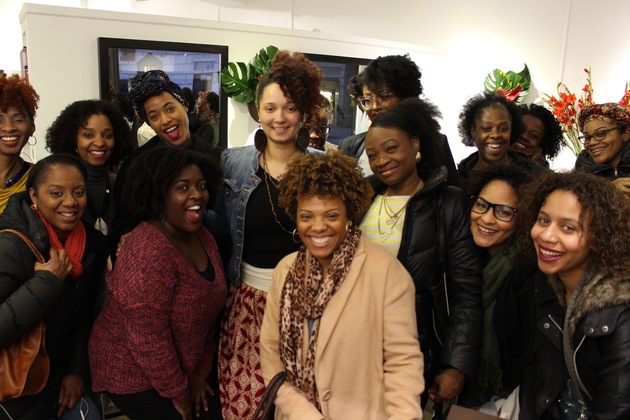 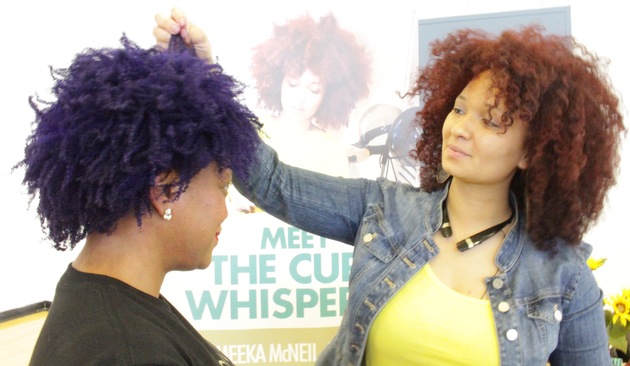 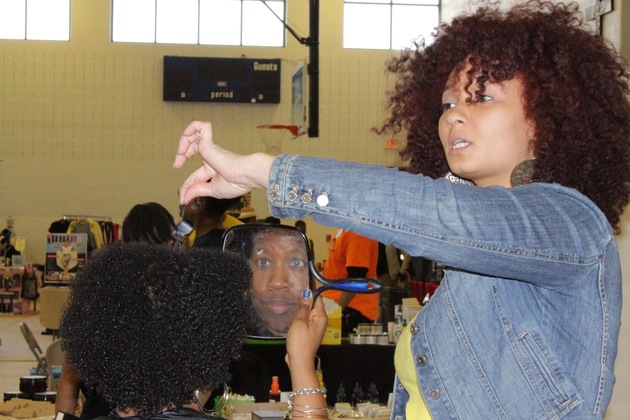 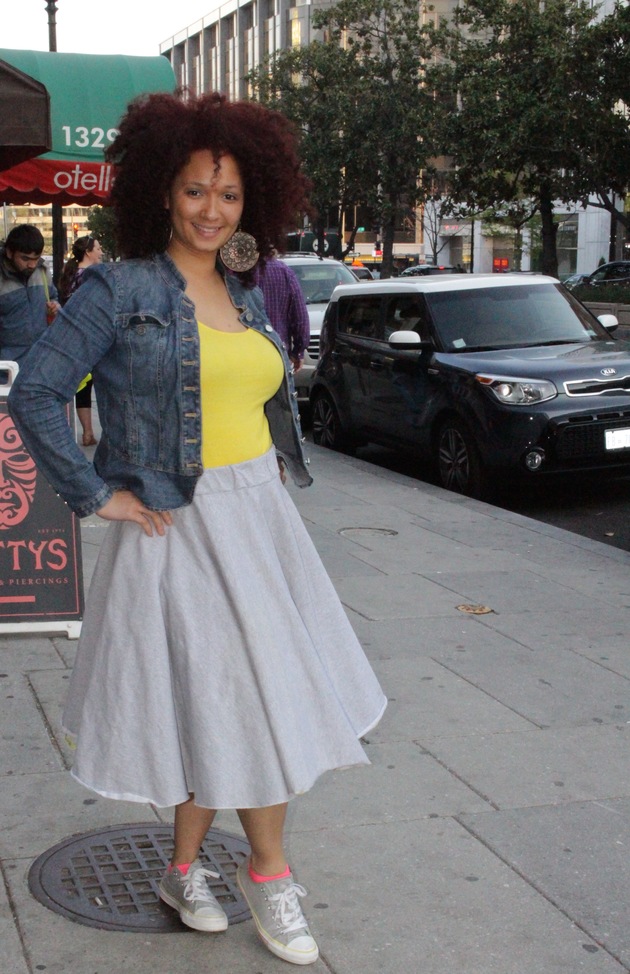 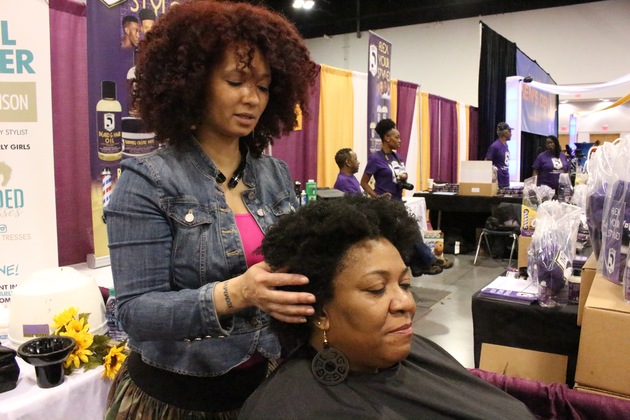 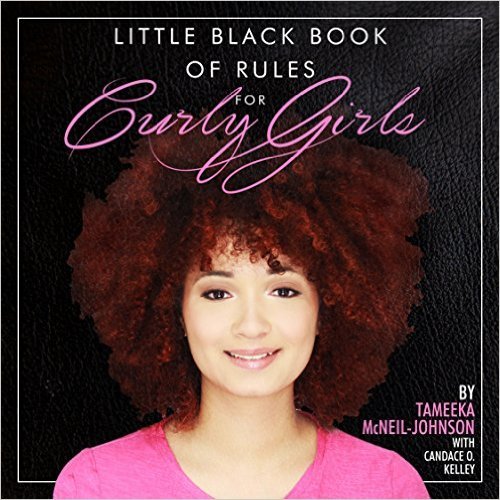 Highly sought after celebrity stylist, The Curl Whisperer is fun, funky, fab and full of information. For over 20 years, New York City-based Tameeka McNeil-Johnson has built her reputation as a respected, licensed, natural hair care artist, author and educator under her trademark of Jaded Tresses (Tameeka’s favorite color is Jade). To “get jaded” means to sit in the chair of Tameeka, one of the most recognized, sought-after professionals for curly and natural hair textures. During her career, she has made appearances across the country, Puerto Rico and the Virgin Islands. She has been a featured stylist in the Mercedes Benz Fashion Week, served as the lead stylist for Sofistafunk fashion shows, services major celebrities, makes guest appearances at hair shows, and has taught her techniques to salons everywhere from 5th Avenue and Puerto Rico to Boston and Curaçao (2015). Dubbed the Curl Whisperer because there isn’t a head of hair she can’t train or quietly talk into submission, Tameeka continues to turn heads for her hair artistry. Whether you are natural, relaxed or somewhere in between, Tameekaʼs education will put you in a different place with your hair. A place where you feel at ultimate ease with yourself and the state of your hair – whatever it may be. In 2015, she began headlining her own traveling natural hair show Let Me School You with The Curl Whisperer. Hundreds showed up to her first event in 2015 and since then it has traveled to 3 states. A true educator, the first show show took place on a college campus and included a series of workshops about styling natural hair and locs. Tameeka’s Transformations Classes For the past 13 years Tameeka has been traveling with her workshop Tameeka’s Transformations. In these sessions, she dazzles huge crowds with live hair demonstrations while simultaneously answering a range of questions with precision, literally making the audience Ooh and Ahh as her makeovers are revealed. Women flock to her after each of her liberating presentations. Curl Coaching Masterclass Tameeka’s signature classes include her monthly traveling Curl Coaching Sessions. These sessions are more intimate than the Tameeka’s Transformations class, servicing just 20-30 women in a VIP session. Women and men have a chance to get up close and personal to learn styling techniques for all hair types. These popular sessions have been featured all over the country and in various salons and stores including Whole Foods Markets and Wal-Mart. Tameeka’s Curl Crush Line Tameeka’s Curl Crush line includes 4 specially formulated products that contain ingredients chosen by Tameeka and reflect her seal of approval. Bottles of her Around the Way Gel, Milk ’n Honey Mask, Wash your [email protected] Hair Shampoo and Tres Leches Conditioner have been flying off the shelves in beauty supply stores in the 5 boroughs of New York City. She plans to further expand her line to address a number hair concerns that her clients have presented to her over her career. Little Black Book of Rules for Curly Girls, Volume 1 An educator at heart, The Little Black Book of Rules for Curly Girls (LBB) was released in 2014. While on tour with her book, Tameeka visited a number of states including Arizona, Pennsylvania and Connecticut. A first in a series of books, LBB lays the foundation , answering questions about natural hair from cut and color to how to treat your hair as the seasons change. Tameeka is constantly developing new products, taking care of clients and making special guest appearances that have inspired people all over the world. You can “get jaded” at, Jaded Tresses’ by starting off with your free consultation. Be sure to follow the Jaded Tresses Facebook and Twitter pages (@Jadedtresses) to find out the latest about Tameeka. For bookings contact Josie Peterson at [email protected]

"Celebrity Hair Stylist, Tameeka McNeil-Johnson aka The Curl Whisper did her magic on an attendees hair"

“You’ll get plenty of excellent tips and tricks from the first book from start to finish.”