Making the Move from Salon Booth Rental to Sola

As the leader in the salon suite industry, with 15 years and 14,000 beauty professionals worth of experience, we are on a mission to change lives and make dreams possible. There are many paths to take as a beauty professional and sometimes it’s hard to know what’s best for you. It’s often said that if something sounds too good to be true, it is. But at Sola, more beauty pros are discovering every day that Sola, too good to be true is just how we roll.

But don’t just take our word for it. We connected with three Sola pros, all with different paths and different reasons they chose to go Sola —Tammy Muniz (Chattanooga, TN), Kim Bennett (Denver, CO) and Roxanne Muir (Toronto, CA) —to find out why they made the switch from salon booth rental to Sola, which provides the opportunity of owning your salon without the downsides. 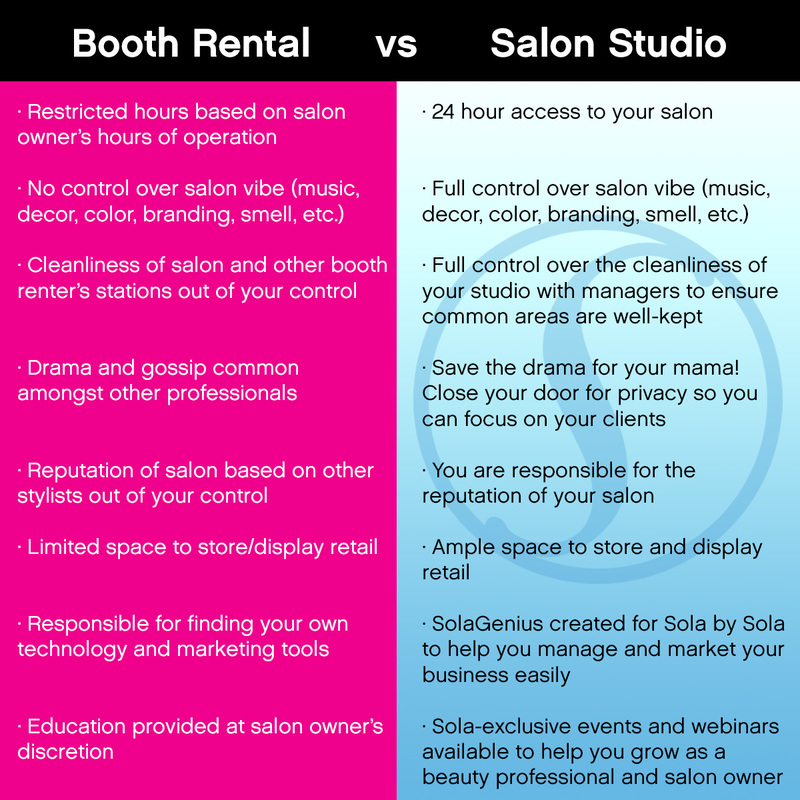 All three agree that being independent was the right decision for them for a number of reasons. Tammy loved that fact that “I could work smarter, not harder, and condense my appointments instead of having them spread out over the course of a day.” She also was drawn to the idea of keeping 100 percent of her income.

Kim Bennett, Sola’s Culture Ambassador, remembers moving to Denver, Colorado, and discovering that 80 percent of salons were salon booth rental, so she just dived right in. As an independent, she says she “loved how I could control my schedule and decide how much to charge for services. It was the start of my independence.”

Canada’s first Sola stylist, Roxanne Muir, has explored multiple avenues as a stylist, including being a traditional salon owner as well as salon booth rental. While booth rental had some benefits over owning a traditional salon, like not having to deal with staff or disasters that arise, like pipes bursting, there were still drawbacks to chair rental she struggled with. “I liked being able to see clients during days or hours when the salon I worked in wasn’t typically open, but I couldn’t do that when renting a chair,” says Roxanne. 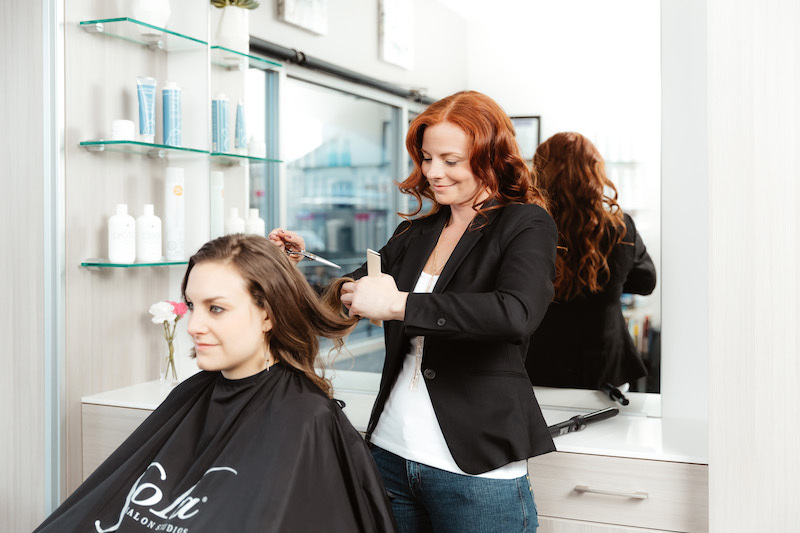 The Best of Both Worlds

What Tammy disliked about chair rental was that she had no control over the type of music being played in the salon or how clean the premises were. “As a renter, you can’t control the salon vibe, just yours.”

When each one of these professionals discovered Sola, they found an opportunity to experience had all of the advantages of being independent with none of the drawbacks. “I decided that I finally wanted to control the whole salon experience, from décor and the products I sell to the music I play and the level of cleanliness,” says Tammy, who adds, “When I came across Sola, I fell in love and came alive again. It was exactly what I needed to live my dream on my terms.”

Roxanne calls Sola the “best of both worlds” because it allows her to go in anytime she wants, control her bookings and spend money on the things she feels are important to her business, while Sola handles the rest. She also loves the amount of privacy that her salon studio provides. “I feel like I’m back in control of my career and less stressed,” she says. “And if I want to take advantage of new opportunities, I can adjust my hours and days.”

Kim, who holds the distinction of being the first Sola stylist ever, loves the fact that Sola offers a turnkey approach, providing a high-end, fully-equipped salon with the support and tools she needs so she’s free to focus on her art and “dream my business into reality.” Another plus is the fact that owning her own salon allows her to control the environment to give her clients the best possible experience.

Aside from the freedom to set your own hours and have a say in the décor, Sola provides additional benefits, like access to quality education, including Sola Sessions and free webinars, and the ability to interface with leading brands and educators in the industry. “Education in our industry was always artistic-driven, but now that Sola has gotten into the game, the focus is on growing your artistic business,” says Kim. “You can’t just do a great haircut anymore; you also need to know how to market your services, build your brand and showcase your retail.”

Tammy, who was offered very little education as a salon booth renter, has attended numerous Sola Sessions and taken advantage of blogs on solasalons.com and training videos hosted on Sola Pro. “All of this helps to keep your career on fire and allows you to improve your skills,” she says. 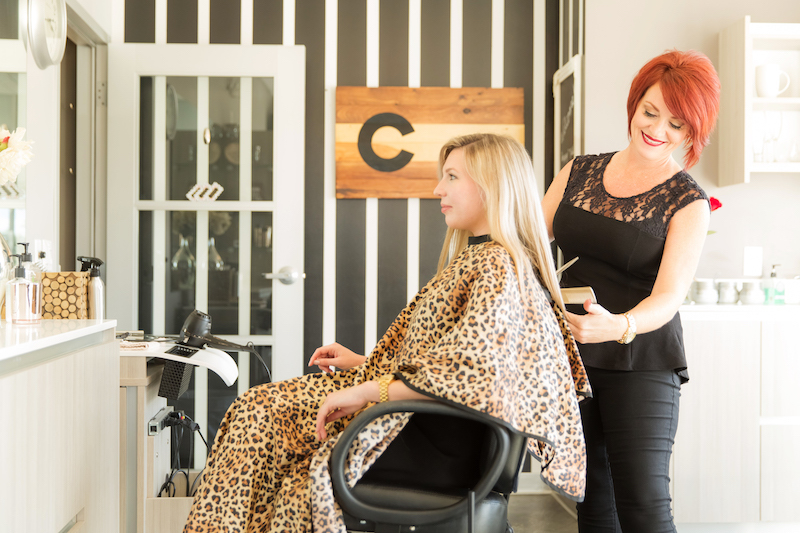 Retail sales have also gone through the roof for these three Sola stylists, especially since they can carry the products they believe in and keep 100 percent of the profits. “I’m a terrible poker player,” laughs Roxanne, “so it’s impossible for me to fake it with clients, but selling what I love is easy, and they trust me to be honest with them.” Kim pays her weekly rent out of the money she makes on retail sales alone, while Tammy reports that her retail sales have tripled since moving to Sola.

So, while all of this is well and good, the bottom line is that joining the Sola tribe has made a significant difference in their personal lives. “I have grown up with this brand, which has become part of my family,” Kim says. “I feel supported in whatever I wish to do and cheered along the way to do better, all of which benefits my lifestyle and my family.”

“Being able to control my hours is a total game-changer,” says Roxanne. “If I want to take a long weekend, I’ll work the Sunday before and the Sunday after so my income isn’t affected by taking time off.” Try doing that in a traditional salon. “Sola also provides a work/life balance that allows me to pursue other opportunities. There’s so much camaraderie among my co-owners at Sola and meeting them has helped me grow as a stylist.”

“Everything that I’ve wanted from my career, I’ve been able to have with Sola,” says Tammy, whose daughter Lauren works with her. “She’s the best co-worker ever, but when we were chosen as two of the Faces of Sola for 2017, well, that was the frosting on the cake! Thank you, Sola!”

Sleigh The Holidays with These Sola Tools 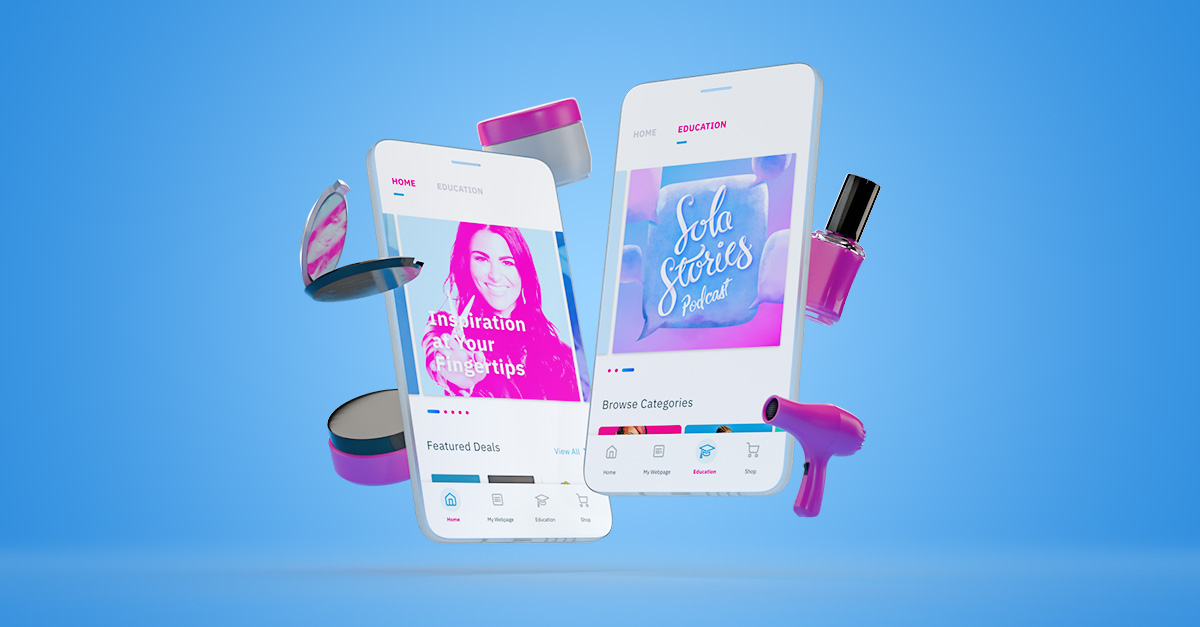 Sola Pro Got A Makeover! 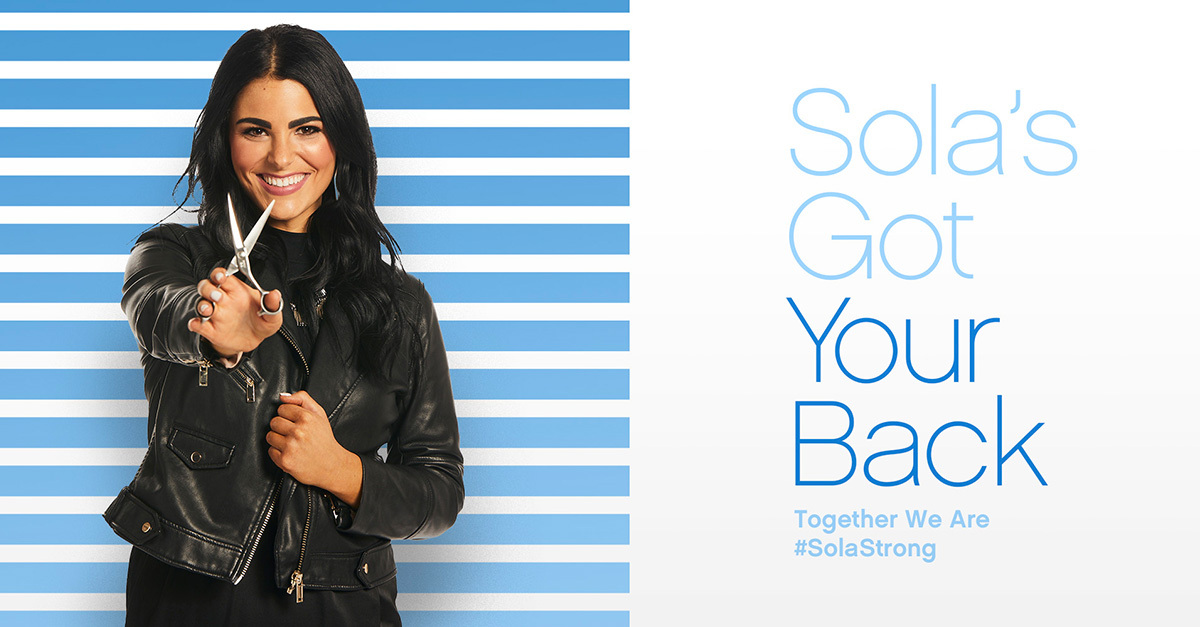